Today’s Throwback Thursday book spotlight brings you a historical fiction written by Elizabeth Ajamie-Boyer. Have you read Memories of War? It was released last year. 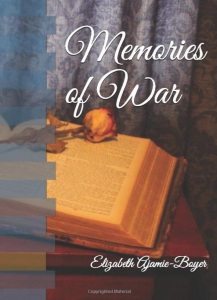 Two years before the Civil War, new graduate from New York’s Auburn Theological Seminary, Markus Petersen and his new bride, Meggie travel south to settle in Maysville, Kentucky where Markus will become assistant pastor at the local church. Once there, they get caught in a tumult of war between the Union and the South.

Markus’s faith in God’s commandment to love your neighbor as yourself and his strong Christian morality lead him to side with the Abolitionist movement. Assisting his friend, John Lane, Jr., they spirit slaves away to the north via the Underground Railroad.

In doing so, he risks everything, his new wife’s safety, and his own life. MEMORIES OF WAR is one family’s tale of hope and courage during a tragic time in America’s history.

Elizabeth Ajamie-Boyer is from Phoenix, Arizona for most of her life, and graduated from East High School, South Mountain Community College, and Arizona State University.  She is married to, and co-writes with TJ Boyer, primary author of The Mirror Gate Chronicles series. As a Christian writer, Elizabeth feels called to write about the accomplishments of Christians who made the United States of America a great country. Elizabeth and TJ have two children and three grandchildren.