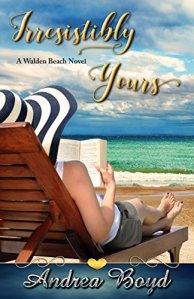 Marriage is no picnic. At least the one Vivian Emerson shared with her late husband hadn’t been. Unfortunately, the devastation Craig had brought into her life didn’t end with his death. Not only did he leave Vivian without closure, he had to go and die in a way that made her the talk of the whole state of South Carolina and beyond. Now her daughter wants nothing to do with her because of him. She would just stick with the single life from now on, thank you very much.

For the last fourteen years since the death of his wife, Bo Manning never even considered wanting another woman in his life. That is until he comes to the rescue of a certain woman with haunting, jade green eyes. Despite Vivian’s resolve not to give her heart to another man, Bo sets out to patiently woo her into the loving relationship he is offering.

Irresistibly Yours reveals God’s fervent effectual call in the form of a classic romance.

Craig Emerson would turn over in his grave if he could see her now. Rolling down Highway 22 toward Myrtle Beach, windows down, radio blaring a classic rock station, the wind blowing through her short hair, with a three-inch wedge sandal pressing down on the accelerator. No one—not even his wife—ever drove his orange and black, 1970 Plymouth GTX.

“Craig, are you seeing this?” Vivian had been talking to her husband this way ever since his death almost a year ago. After this weekend, she decided these little talks would come to an end. There had been plenty of things for her to get off her chest—things she had wanted to say while he was alive, but he would never listen.

So many times in the past year, she would go out to the garage, sit in Craig’s car, and pour her heart out. Sometimes she would talk quietly while tears streamed down her face, and other times she would yell. But this was the first time she’d actually driven his car. So far, her one-sided conversations on this trip had been backed with laughter. This trip to the beach would be her last act of letting go. She was ready.

Vivian smiled at her reflection in the rearview mirror as she ran her fingers through her dark brown hair. Craig had wanted her to keep it long, and she had. At her first stop for a bathroom break, she had tried to brush through the long, tangled mess thanks to driving with the windows down. As the brush snagged another knot, she decided right then it was time for a change. A search for the nearest hair salon on her cellphone’s GPS landed her in front of The Cut and Curl.

After everyone oohed and aahed over the GTX and she finally sat in the angled chair, Vivian told the stylist that she didn’t care how it was cut, as long as it was shorter and easier to manage. Less than an hour later, she emerged with a slightly longer version of a pixie cut. The style suited her, and it definitely showed off her eyes. Why hadn’t she done this years ago? She headed back out on the road feeling light and carefree.

She crossed over Highway 17 and carefully turned into Walmart’s parking lot. The muscles in her upper arms tightened in response to the lack of power steering. No wonder people had been in better shape back when this car was made. As she searched for a spot closer to the door, she started making a mental list of things she needed to purchase to get her through the next four days.

Her ankle twisted a little with her first step toward the store. Vivian had not worn heels in over twenty years because Craig had only been an inch taller than her. She was determined to get used to wearing them again. In fact, she’d bought herself a whole new wardrobe last weekend. Gone was the drab clothing that now hung loose from her frame due to the thirty-five pounds she had lost in the last year. No diet or exercise had been necessary. The junk food Craig loved so much was no more. Plus, she had lost her appetite for a while right after his death.

Vivian tugged the bottom of her orange sweater down in the back. It was a warm day for mid-March, but the wind whipping through the open windows of the GTX had still been cool. She was extra thankful for the layers of clothing when the air-conditioned breeze greeted her as the automatic doors slid open. In less than fifteen minutes she was headed back out into the warmth of the sun.

After loading her groceries into the trunk with the rest of her stuff, she carefully made her way through the parking lot in the tank-like car. Thankfully, there was a stoplight that would make it easier for her to get back onto the busy highway. The light was red and she had almost come to a complete stop when the brake pedal suddenly dropped to the floor. The car rolled past the line until the front end completely blocked the first lane of the road in front of her.

She gripped the steering wheel and her whole body tightened as she prepared for impact. Her head jerked to the left at the sound of screeching tires and a blaring horn. A huge burgundy Suburban stopped just a few feet from her, close enough for her to see the scowl on the face of its curly-haired driver.

Vivian looked in her rearview mirror. A man stepped out of the car behind her and walked toward her. Fear coursed through her. The urge to roll the window up before the stranger got there was strong. But that would be silly. He wouldn’t harm her with so many witnesses.

Another horn blared as the angry woman in the Suburban finally moved around her, tires squalling once she got past the nose of the GTX.

Vivian jumped at the sound of the man’s voice, but the tension in her shoulders eased when she looked up into his smiling face. “The brakes won’t work. The pedal went down to the floor.”

Why did she feel like she’d done something wrong? “I didn’t want it to roll any further.”

“That’s good. Do me a favor and pump the pedal a few times. Does it feel like you have brakes now?”

The pedal didn’t go down all the way this time, but it felt softer than usual, like it would give with enough pressure. “It’s better than before, but it still doesn’t feel right.”

“They should work well enough for you to get off the road. I’ll back up so you can.”

She watched in the rearview mirror as his car backed up a good distance away from her before she put the car in reverse. As soon as the road in front of her was clear, her helper moved around the GTX and left the parking lot. He didn’t even look back as he passed by. The only person he’d been trying to help was himself.

She needed a wrecker but had no idea who to call. Craig had always been the one to take care of things like this, and before him, her father had done it. According to them, a mechanic couldn’t wait to see a woman come into his shop because he could charge whatever he wanted, and she would be none the wiser.

A car pulled up behind her and blew the horn. She hunted around on the steering column until she found the switch for the emergency blinkers and then waved the car to go around her. She was alone now. Craig was gone, and her parents were in Colorado. She didn’t even have a son she could call on. There was nothing left to do but handle this the best way she knew how. Vivian slipped her phone from her pocket and began scrolling through her options on Google.

Each of Andrea Boyd’s series represents a different genre but all fall into the category of romance. All offer an element of her own brand of humor. And all are a tribute to God. Besides writing, she loves spending time with her family, quilting, going to car shows, and driving around in her 1968 Barracuda convertible. Andrea lives with her husband, Tommy, and at least a couple of cats in York County, SC.