I hope you’re having a great week.

Do you need something new to read? Well I’m here to help you discover new authors or a backlist you didn’t know existed. Today’s TBT Book Spotlight: Providence: Hannah’s Journey takes us back to 2016. Have you read this biblical fiction story?

A Note from the Author

This was my first published novel and my first work of Biblical fiction. “Providence” is similar to the Bible story about an enemy army commander found in II Kings 5. I changed Naaman’s name to Naabak because I didn’t adhere to the strict Bible narrative like my other novels. I worry some student is going to mess up Naaman’s name on a Bible test because of my book. I hope the teacher is gracious and relays the theme of Naaman’s story; the Kingdom of God spreads outside of Israel to an Aramean army commander. 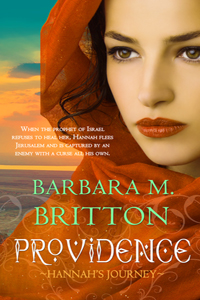 As the sole daughter of the chief priest, Hannah is publicly shamed when the prophet of Israel refuses to heal her.

Determined to restore her family’s honor, Hannah escapes Jerusalem in hopes of finding the prophet and convincing him to heal her deformities. Gilead, a young Hebrew guard sympathetic to her plight, willingly accompanies her. On their way, they are captured by a band of raiders.

Hannah is forced to serve in the household of the commander of the Aramean army, an officer who is in need of healing himself. Meanwhile Gilead is being used as sword practice for the Aramean soldiers.

Hannah must act fast to save Gilead and herself. But survival means coaxing the prophet of Israel to heal an enemy commander.

Barbara M. Britton lives in Southeast Wisconsin and loves the snow—when it accumulates under three inches. Barb writes romantic adventures for teens and adults in the Christian fiction and Mainstream markets. She is published in Biblical fiction and enjoys bringing little known Bible characters to light in her Tribes of Israel series. Barb’s debut novel, “Providence: Hannah’s Journey,” released in October of 2016 from Harbourlight Books. Barb is a member of the American Christian Fiction Writers, the Society of Children’s Book Writers and Illustrators, Romance Writers of America and Wisconsin Romance Writers of America. Barb has a nutrition degree from Baylor University but loves to dip healthy strawberries in chocolate.