I’m kicking this week of with a blog tour. I’m one of the stops for The Silent Song of Winter. Grab a cup of tea (or coffee) and get ready to have some fun!

“When all the noise has gone silent, all that is left is her song.

The southern town of Saisons lies at the crossroads between North and South, progressive and genteel antebellum life. Between East and West, between history and heritage, and new frontiers. Downton Abbey meets Gone With the Wind.

It’s 1912, in a world where slavery is dying and women’s rights are rising, and four young women who once shared a bond—and experienced a tragedy—question their own truths.

Pearl had lived under the impossible taskmaster of perfection. Nothing she does or ever did pleased her mother. And nothing she ever did could disappoint her father.

Caught up in the mystery of her friend’s curious—and secretive—return, Pearl wrestles with her own decisions, and flees lest her own secrets are exposed.”

I’ve always had voices—er, stories in my head. I once said I should write them all down so someone could write them someday. I had no idea at the time that someone was me!

I have been writing since 1995, and began working in earnest on my debut novel, Tessa in 2013.  Meanwhile, I cranked out a few dozen poems, made countless notes for story ideas, and earned my BFA in Interior Design.  I lived with depression for many years, and the inherent feelings of worthlessness and invisibility; I didn’t want to be who I was and struggled with my own identity for many years.  My characters face many of these same demons.

I write stories of identity conflict. My characters encounter situations that force the question, “Who am I really?” For all who have ever wondered who you are or why you’re here, my stories will touch you in a very real—maybe too real—and a very deep way. I know, I write from experience.

1. How frequently do you hear from reader fans?  Do you have any fun and/or weird stories?
It still feels surreal to me that I have “fans” aka avid readers!! I have several friends, some of whom I’ve known for years and some who are “newbies” who post and comment regularly on Facebook, especially in anticipation of the next story!! I’ve only just decided to start a page for fans—Robin’s Reader Flock!!! #IMTOTALLYTRIPPING

Last summer, a friend of mine, and avid reader, “L,” was going for some medical treatment. I commented on her post that I would be praying for her in the coming weeks and days. She replied that she’d like copies of all of my books to read during her recovery. A mutual friend private messaged me that she would purchase the books for our friend. “L” has now read all of my books thus far, some twice even!! Authors LOVE avid readers like “L.” PS, “L” has recovered nicely.

2. If you could go to lunch with one of the characters from The Silent Song of Winter, who would you pick and why?
GREAT QUESTION!! I think I’d choose Olivia Divine. She was a seeming minor character who came to me at a random moment—I was in the kitchen—and turned out to have a significant role in Pearl’s story!

3. Who was the hardest character to write in The Silent Song of Winter? The easiest?
OY to the VEY! I ask this question, too, and it’s kind of a head scratcher! LOL

Pearl was probably the easiest for me because of all my characters thus far, she is the most like me!

Truly, because I get into the head of each of my characters, it flows fairly easy for me. The saddest to write was Odette Marchand, because she is so unhappy in life, and therefore it is her goal to make everyone else miserable.

4. What inspired the idea for The Silent Song of Winter?
Funny thing… I had this idea (still do!) for a totally different story but when I sat down to write it, this series came out!!  And it’s way different to what I expected!  LOL #Imapantzer #notaplotter  Seasons turned into a story of friendship, and mystery and suspense. And always the struggle of self-worth and identity / purpose.
By the way, I will write that totally different story—methinks that’s the story behind my next series, The Steppe House….

5. What do you want readers to take away from reading The Silent Song of Winter?
That we are loved. That we don’t have to prove ourselves to those who love us. That perfectionism is a cruel taskmaster, and no mistake is unforgiveable. That we are loved in spite of our mistakes. 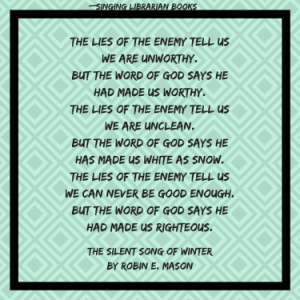 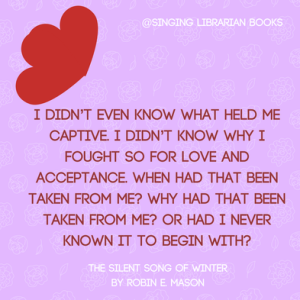 Giveaway includes: a print copy of the book, a (faux pearl) brooch and pair of earrings, peppermint candy’s (Pearl’s fav) china tea and cup, and a sampler of the tea, and a bookmark.

17 thoughts on “Giveaway + Tour: The Silent Song of Winter”