I cannot believe 2017 is almost finished! Yikes! Have you completed your Christmas shopping? If not, consider the gift of reading. You can gift eBooks and of course paperbacks. Since my author friends have happily supplied me with their deals this week, take a look for some Christmas gift ideas!

The Blurb: “Retired police officer Rick Stanton dons a Grinch costume for the holidays and “patrols” Christmas, Florida to promote the festive town. Everyone falls under his charm except the person he most wants to impress—Postmaster Edie Hathaway. The Grinch is stealing Edie’s heart, but will Edie learn to trust him before he gives up on love?” 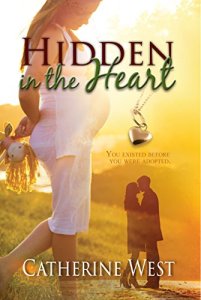 Catherine West’s Hidden in the Heart
eBook on sale for 99¢!

Snippet of the Blurb: “For the first time in her life, Claire wants to know where she came from…

After losing her mother to cancer, and suffering yet another miscarriage soon after, Claire Ferguson numbs the pain with alcohol and pills, and wonders if her own life is worth living. Adopted at birth, Claire is convinced she has some unknown genetic flaw that may be causing her miscarriages. She must find a way to deal with the guilt she harbors.”
Purchase: Amazon
Follow: Website, Facebook, Twitter

Catherine West’s Bridge of Faith
eBook on sale for 99¢!
Snippet of the Blurb: “Two lives taken down different roads – one enduring love – one shot at starting over.
If only they believed in second chances.Julia Connelly is finally free from twelve long years in an abusive relationship. Now able to live the life she’s longed for, Julia takes her two children back home to Vermont, hoping for peace and healing. The last person she expects to see is the man she eloped with at eighteen—who then abandoned her two months into their marriage, with little explanation.”
Purchase: Amazon
Follow: Website, Facebook, Twitter

Paula Moldenhauer’s The Joy Scrooge
The Blurb: “Spunky pediatrician Krista Fjeld loved Tait Skroog for most of her life, but when Tait and his young son, Timmy, move back to town, she is shocked by the change in her old heart-throb. Embittered by his wife’s death, Tait is paralyzed by fear and grief. Will Krista convince him to embrace life—and her—or is the risk too great for everyone?”
Purchase: Amazon
Follow: Website, Blog, Facebook, Twitter, Amazon 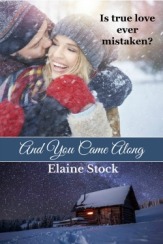 Elaine Stock’s And You Came Along

The Blurb: “Days before Christmas, an eviction notice and job termination sends single parent Jacey and son scrambling from town. Zander, a detective recovering from an injury, needs to start the next season of his life. When a blizzard traps them together, the kindness of strangers provides a place where pain is soothed and hope is renewed . . . until their pasts catch up to their present and threatens a forever separation. Is true love ever mistaken?”

Snippet of the Blurb: “Rebecca Singer once was the kind of nurse who partied all weekend and closed the bar with the last karaoke tune. Then she met the Lord and vowed to make up to Him for those wasted years by serving in the worst place in the world. She determined to earn her redemption in the Brazilian Amazon jungle.”

Lucette Nel’s A Match of Sorts

Snippet of the Blurb: “As Christmas approaches, widowed Reverend Caleb Brennan needs a wife, or his vengeful father-in-law will take his young daughters. When his mail-order bride jilts him, Caleb grows desperate. During a storm, he finds an unconscious boy outside his home with signs of foul play. Despite his previous misfortune, obligation compels Caleb to lug the stranger inside. But as he provides first aid, he discovers more than he expected.”

The Blurb: “Family legend says that the Preston fruitcake recipe makes young couples fall in love. But when WAC Evelyn Preston sends one to her high school crush stationed overseas during WW II, she snags the wrong private! When Willie Baxter tries to clear up the unintentional deception, will Evie give his poor smitten heart a chance?”

Snippet of the Blurb: “What begins as a friendly city rivalry with Bangor turns into a baffling case for the Priority Unit. One of their colleagues turns up dead in what should have been a mock crime scene, and their suspects are legion. Eddie is in charge of the investigation, but he’s more than a little distracted by Leeanne’s erratic behavior. Is the wedding on or off?”

Under the Mistletoe Boxset

The Blurb: “Christmas is the time when families get together and love abounds. 8 inspirational authors have teamed up to bring you 8 wonderful Christmas novellas sure to bring you joy this holiday season.
Enjoy 2 historical and 6 contemporary romance stories sure to warm your heart.

The Christmas Bride by Jenna Brandt, Once Upon a Star by Lorana Hoopes, Gift of Peace by Judith Robl, Fall on Your Knees by Mary C. Findley, Christmas Conundrum by Carol E. Keen, Holly’s Noel by Elle E. Kay, Love’s Sacrifice by Evangeline Kelly, and Christmas in Trace Hallow by C.J. Samuels”

Ada Brownell’s What Prayer Can Do

The Blurb: “Find out how Ennis Surratt, known as the “meanest man in town,” was changed in a moment by an encounter with God. Discover how John Feliciano instantly was healed of blindness. Rejoice with Marjorie Eager whose family escaped death when their truck rolled down a mountain, and how God stopped a forest fire headed for their house when they had no way of escape. Have your faith strengthened by a mother who prayed on her deathbed for her sons to meet her in heaven, and how years later God grabbed Gary Hilgers out of sin, saved his marriage, and changed his life.”

Snippet of the Blurb: “Brianna Reaner, Queen of Aisling, has never been on a date, been in love, had a boyfriend, or has even had a crush on a boy before. According to the laws of her country, she must marry by her eighteenth birthday or risk losing the right to rule her kingdom. How is she supposed to find a suitable husband in less than six months? What will the consequences be if she makes the wrong choice?” 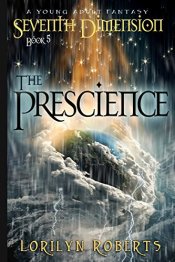 Lorilyn Robert’s’ The Prescience (Book 5)
Enter here for this giveaway.

The Blurb: “When bombs fall on Jerusalem, Shale and Daniel rescue an orphan and return to the first century. Amid supernational tribulation, they attempt to unravel the mysterious disappearance of Daniel’s father and the goal of the New World Order. When multiple realities collide, God reveals once again time is an illusion until the appointed times.”

The Blurb: “Kat Williams’s brother died in a gruesome accident in the mountains of East Tennessee. She blames herself.

Ryan Jenkins’s fiancée was murdered. He couldn’t protect her.

With the death of her brother, Kat believes she is unworthy of love from anyone—even God. When a good friend elicits a promise that she will stop living in the past, then leaves her clues to a real-life treasure hunt, Kat embarks on an adventure chock-full of danger. To find the treasure, Kat will have to survive wild animals—and even wilder men. Can she rely on Ryan, the handsome wildlife officer assigned to protect her … without falling in love?”

Under the Mistletoe Release Party

Join the authors of Under the Mistletoe boxset for their release party. RSVP HERE for the December 2nd party. It starts 5pm EST!