Skip to content
December 7, 2015 Toni
The year is winding down, but my TBR pile is continuing to grow. Last week, I actually read every book in my pile. That rarely happens, but a couple of them were novellas which made it easy for me.

But, it’s another week, another pile. Here’s what I’m hoping to read this week!​

Christy Barritt’s Random Acts of Murder
​I saw this was free and since I’ve enjoyed other books by Ms. Barritt, I downloaded it to my ereader.

Curious as to what it’s about? Here you go: “When Holly Anna Paladin is given a year to live, she embraces her final days doing what she loves most—random acts of kindness. But one of her extreme good deeds goes horribly wrong, implicating Holly in a string of murders. Holly is suddenly in a different kind of fight for her life.

Only two other people know Holly was at the site of the murder, and one of them is the killer. Making matters stickier is the fact that the detective assigned to the case is her old high school crush and present day nemesis.

The clocking is ticking as Holly is forced to play a dangerous game. Will Holly find the killer before he ruins what’s left of her life? Or will she spend her final days alone and behind bars?”

You can follow Ms. Barritt on her Website and purchase the novel on Amazon. (Psst: it still may be free.)​​ 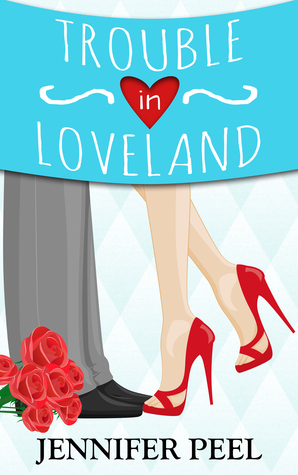 Jennifer Peel’s Trouble in Loveland
After I read Jessie Belle by Ms. Peel, I decided I would have to read all of her books (because ​Jessie Belle​​ ​was that awesome).

Here’s what the back cover blurb says: “Charlee Jensen had what she considered the idyllic childhood growing up in a town named for that most prized emotion of all, Loveland, Colorado. At seventeen, her teenage crush, a man eight years older than her, marries and she naively thinks this is the worst thing that would ever happen to her. Then her parents divorce and her world crumbles. She finds herself being whisked away from her beloved home and estranged from her father.

Now eight years later, with two degrees that she never wanted in hand, and no job prospects, her father offers her a position with his CPA firm. With no other options available, Charlee accepts his offer and returns to the hometown she loved. While rebuilding her relationship with her father, she discovers that perhaps a romantic relationship is in the cards for her, with her old teenage crush, Ryan Carter, who just happens to still live next door and is now a partner in her father’s CPA firm.

Newly divorced and single dad, Ryan Carter, isn’t quite sure what to make of the girl next door, who’s all woman now. He finds himself having a hard time resisting this beautiful yet annoyingly charming woman, but their age difference and his complicated relationship with his ex-wife cause quite a bit of trouble for the couple. Ryan finds himself torn between keeping the peace with his ex-wife and mother of his child and his feelings for Charlee.

Can they successfully overcome their troubles in Loveland? Find out in this clean romance filled with sparks, humor, and of course, a little bit of trouble.”

Carrie Turansky’s Where Two Hearts Meet
Yay for the novellas! Ms. Turansky has two novellas in this book and I’m excited. My days are becoming increasingly shorter as the items on my to-do list grow longer. So novellas have become my best friend. I can sit down and finish it.

There’s no better place for romance, forgiveness, and second chances than the Sweet Something Teashop.

Allison Bennett, co-owner of a financially strapped teashop in Princeton, New Jersey, receives a large anonymous check that saves her business. But she has no idea who sent it. Could it be from Peter Hillinger, the wealthy businessman who owns the shop next door and wants to win Allison’s heart? Or is it from Tyler Lawrence, Allison’s old boyfriend, who returns to town claiming a renewed faith and a changed life. Allison doesn’t know whom to trust. Should she follow her head or heart, or is there Someone else who can guide her toward the best path for her future?

Wherever Love Takes Us

After twenty-five years of marriage, Matt and Tessa Malone are struggling to recover financially and rebuild trust following a business failure. Then Matt inherits property in Oregon, and he wants to move the family there to make a fresh start. But Tessa can’t imagine giving up the cozy teashop she co-owns with her sister, or leaving her friends and family in Princeton. Whose dream will they follow, and how much will it cost their family? Can they resolve their differences and rebuild a love that seems lost?