Skip to content
November 9, 2015 Toni
It’s another week closer to the end of the year. Wow, how time flies. I added a BUNCH of books to my TBR, but I’m going to drag it out over the next few weeks for you. So this week I’m bringing you some historical fiction. 🙂

1. Roseanna M. White’s ​The Lost Heiress
​​I’ve seen this pop up all over the place and have wanted to read it. And I was blessed and won it in a giveaway. (Yay me!) I can already feel a review coming on.

Here’s the blurb: “Brook Eden has never known where she truly belongs. Though raised in the palace of Monaco, she’s British by birth and was brought to the Grimaldis under suspicious circumstances as a babe. When Brook’s friend Justin uncovers the fact that Brook is likely a missing heiress from Yorkshire, Brook leaves the sun of the Mediterranean to travel to the moors of the North Sea to the estate of her supposed family.
The mystery of her mother’s death haunts her, and though her father is quick to accept her, the rest of the family and the servants of Whitby Park are not. Only when Brook’s life is threatened do they draw close—but their loyalty may come too late to save Brook from the same threat that led to tragedy for her mother.
As heir to a dukedom, Justin is no stranger to balancing responsibilities. When the matters of his estate force him far from Brook, the distance between them reveals that what began as friendship has grown into something much more. But how can their very different loyalties and responsibilities ever come together?
And then, for a second time, the heiress of Whitby Park is stolen away because of the very rare treasure in her possession—and this time only the servants of Whitby can save her.”

You can find Ms. White on her Website and purchase the novel on Amazon.​​ 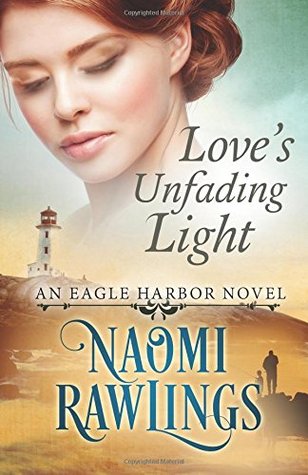 2. Naomi Rawlings’ Love’s Unfading Light
This lovely book was free on Kindle so I snatched it up. (I believe it is free until 11/9.) And it looks like Ms. White (from #1) endorsed this novel.

Here’s the blurb: “Tressa Danell is finished with men—from the wastrel who left her a widow, to the smelly trapper who keeps proposing, to the banker who wants to repossess her bakery. Every hour is spent working to pay off her late husband’s debt and keep a roof over her son’s head, though it’s doubtful she can do both for very long. But one thing’s certain—she’ll never be beholden to a man again.

Tired of living in a small town that blames him for actions his father committed ten years ago, Mac Oakton is scheduled to leave Eagle Harbor. So why does the pretty widow at the bakery keep tugging at his heart? He can’t get involved in her predicament when he’ll only be around for two more weeks.

But when Tressa’s burdens overwhelm her, they both face a decision. Can Mac set his own plans aside to help? And can Tressa accept his support if that means giving up her independence … and being obligated to a man again?”

You can find Ms. Rawlings at her Website and purchase this novel on Amazon.​​

3. Nancy Moser’s Love of the Summerfields
Here’s another book I got for free and since I was in a historical romance kind of mood, I downloaded it. (Go ahead and check if it is still free on eBook.)

Here’s the blurb: “1880 England: the lives and loves of manor and village intertwine. Earl and shopkeeper, countess and clerk; all will be stunned and transformed by a secret that begs to be revealed.

When the Weston family returns to Summerfield Manor at the close of the London social season, both village and manor relax into their normal existence. But for four women, turmoil awaits. Each must battle the restrictions of her position as her faith and character are tested.

Adelaide Weston, the feisty and domineering dowager countess, is thrust out of her carefully structured life of duty by the reappearance of her first love.

Ruth Weston, the manor’s reclusive, guilt-ridden countess, struggles to emerge from self-imposed exile to embrace her marriage, her family, and the duties of her position.

Ruth’s loyal lady’s maid, Molly Wallace, juggles the demands of her job, the needs of her own tumultuous family, and a secret romance.

And Lila Hayward, a shopkeeper’s daughter, finds herself in love with a viscount’s son who’s engaged to Ruth’s spoiled daughter. Lila is sorely tested when she is obliged to act as liaison between the two, putting her in constant contact with the man she loves but can never hope to win.”